A Textual Study of Shivaleelarnavam - Sarga 1 (Masterpiece of Neelakantha Deekshitar)

Shivaleelarnavam is a mahakavya composed by the great poet Neelakantha Deekshita. There are 22 cantos in this kavya, describing the 64 leelas of Shiva, the glory of Shiva-bhakti and Shiva-tattvas. Shanta-rasa is described as a predominant form in this kavya. It also contains a description of all other rasas supporting the main rasa. In this course, Smt. Visalakshi Sankaran provides a detailed explanation of each Shloka in detail in English, bringing out the beauty and aptness of various linguistic and poetic devices used by the Mahakavi. 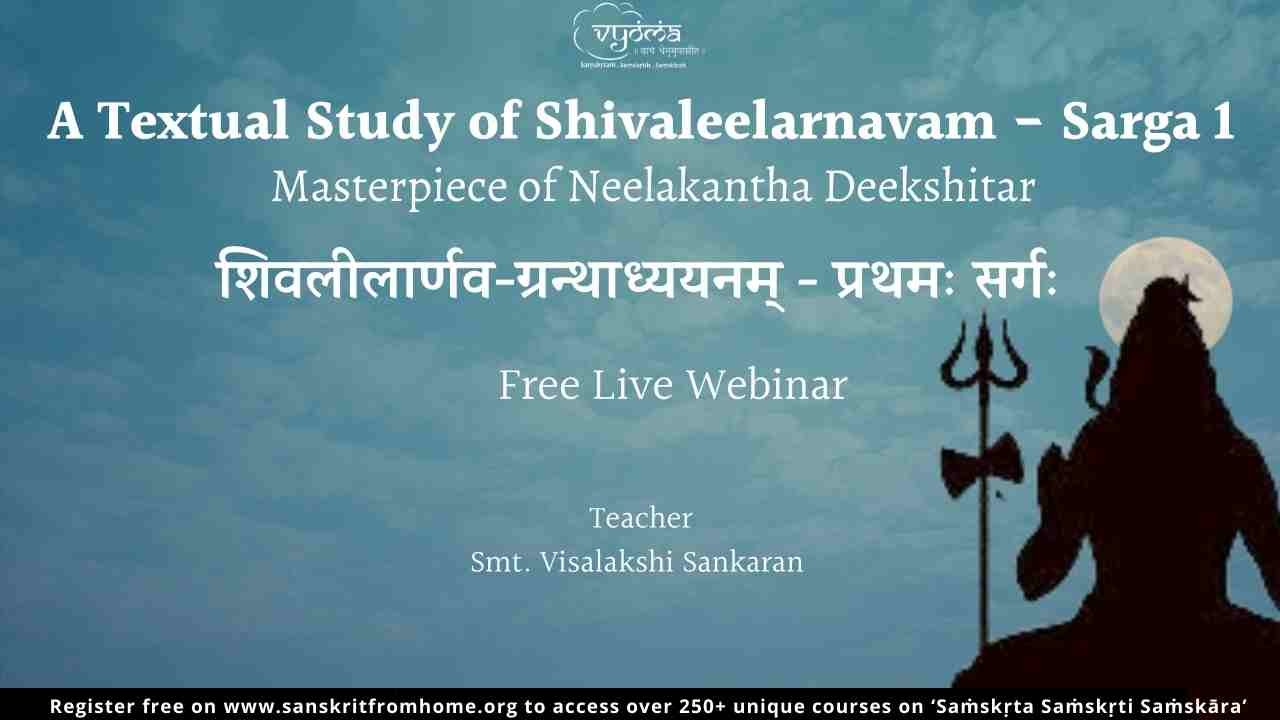 Mahakavi Sri Neelakantha Deekshita was born at the end of the 16th century. He was an ardent devotee of Goddess Meenakshi. He was from the lineage of the great advaitic saint Appayya Deekshita.
Neelakantha Deekshita has composed many kavyas and mahakavyas, including Shantivilasa, Anyapadesha Shatakam, Kalividambanam, Sabharanjana Shatakam, Gangavataranam, Neelakantha Vijaya Champu, etc. He is best known for his skill in satire, as attested by the popular saying "नीलकण्ठस्य वक्रोक्तिः सा मुग्धेन्दुकलानिभा" (Neelakantha Deekshita's vakrokti is as charming as the crescent moon).
Shivaleelarnava is a mahakavya in 22 sargas, describing the famous 64 divine leelas of Shiva. These stories are derived from the description of these leelas in other texts like Halasya Mahatmyam of Skandapurana, and Thiruvilaiaadal, a Tamil classical text. It is considered by many to be among the best works of Neelakantha Deekshita.
This course covers the first Sarga of Shivaleelarnava, containing 81 shlokas. In this introductory sarga, the poet describes the characteristics of great kaavyas and great kavis, while also admonishing the poor poets and the fate of Vagdevi (Goddess of speech) who is abused by them.
Yes, there will be an assessment conducted at the end of the course, and certificates will be issued to all students who get a minimum of 60% in the assessment.
1. Scroll above and Click on the "Enroll for Free" button.
2. If you have not signed in, you can sign in. If you are a new user, you can get a new account for free in less than 2 minutes.
3. Once you enroll, you can access all materials from your learning dashboard.
4. For any issues/questions, please check our FAQ page / Help Videos.