This is a completed webinar course for learning the recitation of “Sri Raghuveera-Gadyam”. This is a marvellous Gadyam (prose) by Sri Vedanta-Desikacharya which succinctly summarizes the Adi-kavyam, Srimad-Ramayanam of Maharshi Valimiki. In a glorious stream of flowing epithets, Sri Vedanta Desika describes the valour and majesty of Lord Rama. This text is highly venerated and is ideal for daily parayana practice. In this course, Smt. Brunda Karanam teaches to recite the Raghuveera Gadyam with good pronunciation and proper split-points.

Key benefits of the course - 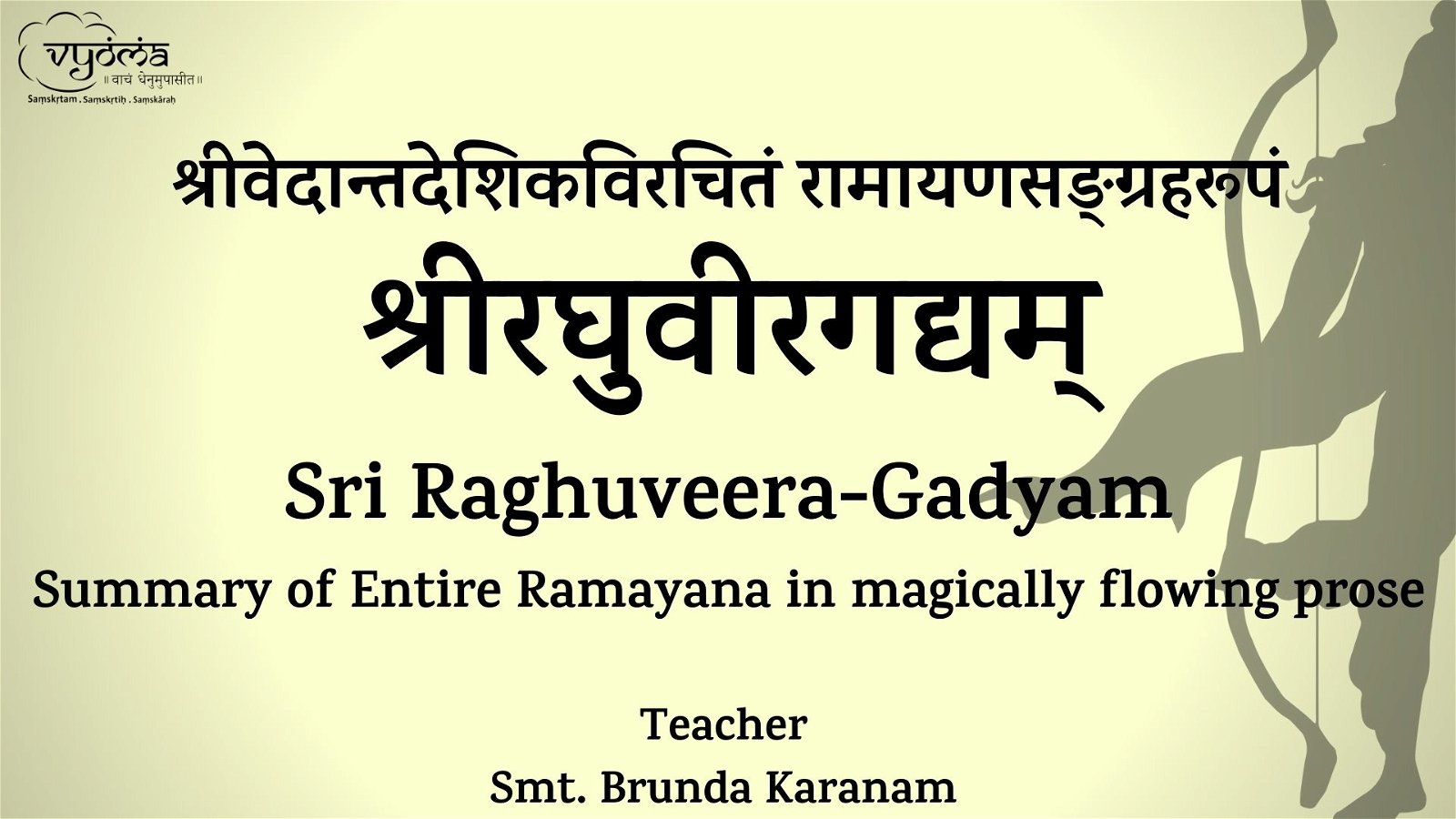 Gadya (Prose) form of Stotra literature is a unique genre popular since several centuries. It is characterized by long compound words (samastapadas) which bring out emotions forcefully and are suited for grand descriptions of deities. Raghuveera Gadyam (Mahaveera-Vaibhavam) of Sri Vedanta Desika is one such majestic prose stotra which describes the valour and majesty of Srirama, incomparable in battlefield. The opening sambodhana addresses Rama as “Mahaveera” – the great warrior. The text is actually a series of sambodhanas (epithets) addressing Srirama. As a part of these epithets, Sri Desika also weaves the incidents of Srimad Ramayana in the same order of Valmiki Ramayana. There are about 94 such epithets in the text, which summarize the entire story of the Ramayana. As a result, parayana of this short text is believed to grant the punya of reciting the entire Ramayana.
The composer, Sri Vedanta Desika, is a highly venerated Acharya of the Srivaishnava Paramparaa, popularly titled “कवि-तार्किक-सिंहः” – A Lion among poets and logicians. A prolific composer, he has authored over 120 works in Sanskrit, Tamil and Manipravala (mixture of languages). These include various stotras, kaavyas, chitrakaavyas and works on Vishishtadvaita philosophy.
Knowledge of Samskrtam, though beneficial, is not a prerequisite for this course.
There is no certificate offered for this course currently by Vyoma.
1. Scroll above and Click on "Enroll for Free" button.
2. If you have not signed in, you can sign in. If you are a new user, you can get a new account for free in less than 2 minutes.
3. Once you enroll, you can access all materials from your learning dashboard.
4. For any issues / questions, please check our FAQ page / contact our support team here.