Rasangangadhara of Jagannatha is one of the most important advanced treatises of Sahitya Shastra. It covers in detail all aspects of poetics. In these videos, Smt. Visalakshi Sankaran explains the intricacies of the text in English, covering the initial portion of the text (Till the khandana of Appayya Dikshita's interpretation of the verse nissheshachyutichandanam) 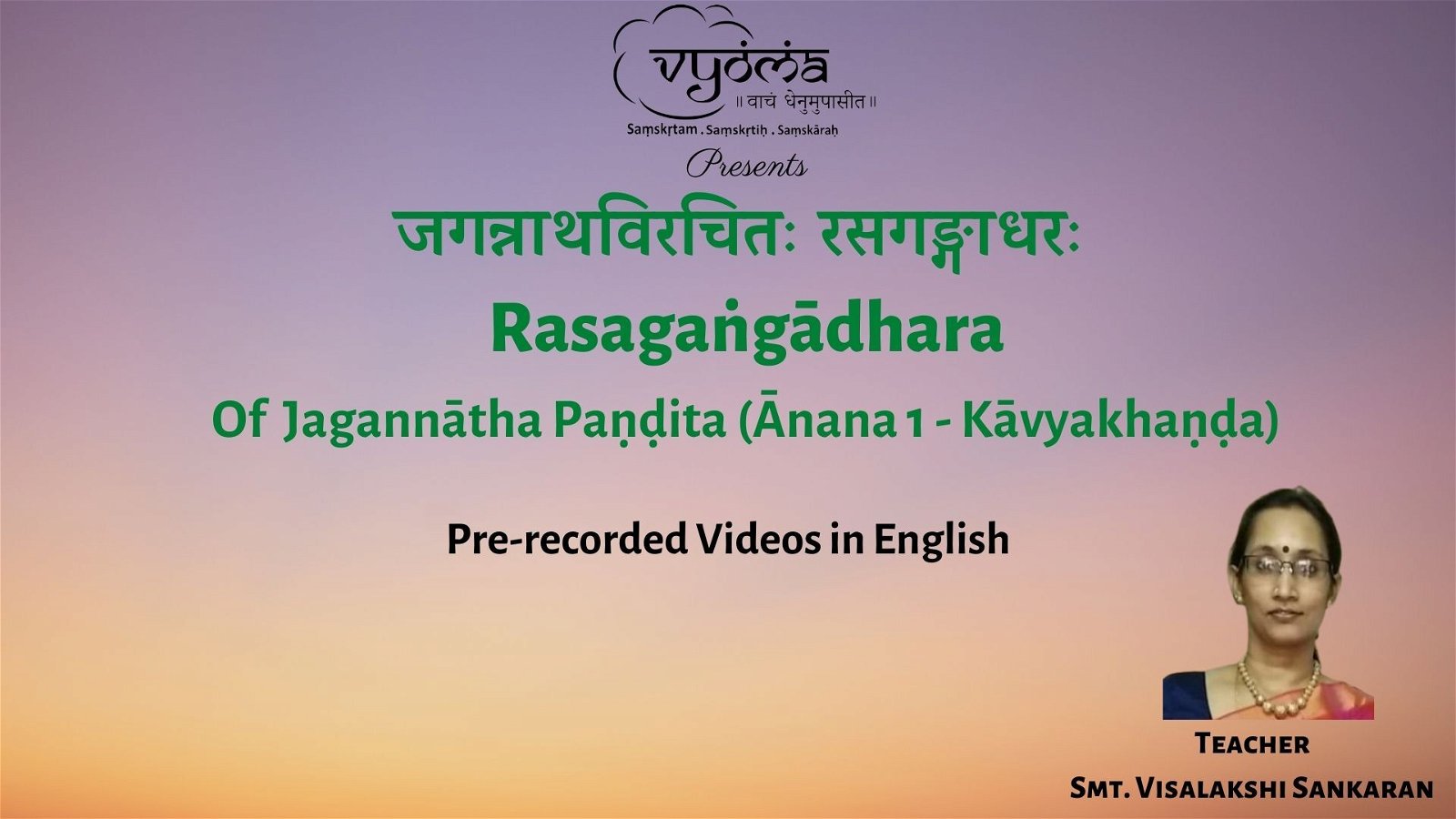 The Rasagangadhara is an authoritative text on literary theory written in the 17th century by Jagannatha Panditaraja. This large work continues the tradition of the theoretical analysis of literary beauty begun by Anandavardhana (9th cent.) and systematized by Mammata (ca. 12 cent.). The Rasagangadhara treats all the central topics of the Rasa-dhvani tradition in the course of defining terms and criticizing previous characterizations.
Jagannatha was a famous poet and literary critic who lived in the 17th century. The poet is known for his famous treatises like- Bhamini vilasa, Rasagangadhara and Chitramimamsakhandana in Sahityashastra, Manoramakuchamardana in Vyakaranashastra, etc. He was also a poet part excellence, who composed many kaavyas and stotras including Gangalahari, Karunalahari and Lakshmilahari. His title, “Pandita-raja” (Emperor of Scholars) was a well-deserved tribute to his in-depth scholarship across various shaastras.
The course covers the initial portions of the first chapter (Prathamanana) of Rasagangadhara. It covers the following topics -
मङ्गलाचरणम्
काव्यलक्षणम्
प्रतिभायाः काव्यकारणता
काव्यस्य चातुर्विध्यम्
उत्तमोत्तमकाव्यलक्षणम्
The course ends with Jagannatha’s khandana of Appayya Dikshita’s interpretation of the verse निःशेषच्युतिचन्दनम् ।
There is no certificate offered currently for this course by Vyoma.
1. Scroll above and Click on "Enroll for Free" button.
2. If you have not signed in, you can sign in. If you are a new user, you can get a new account for free in less than 2 minutes.
3. Once you enroll, you can access all materials from your learning dashboard.
4. For any issues / questions, please check our FAQ page / contact our support team here.