This course contains audio in Teaching and Learning mode for selected portions of Valmiki Ramayana (Sanskshepa Ramayana, Dhyana shlokas, Gayatri Ramayana, Aditya Hridyam, Mangalam). These audios will help the devotees learn these verses with accurate pronunciation and recite them from memory 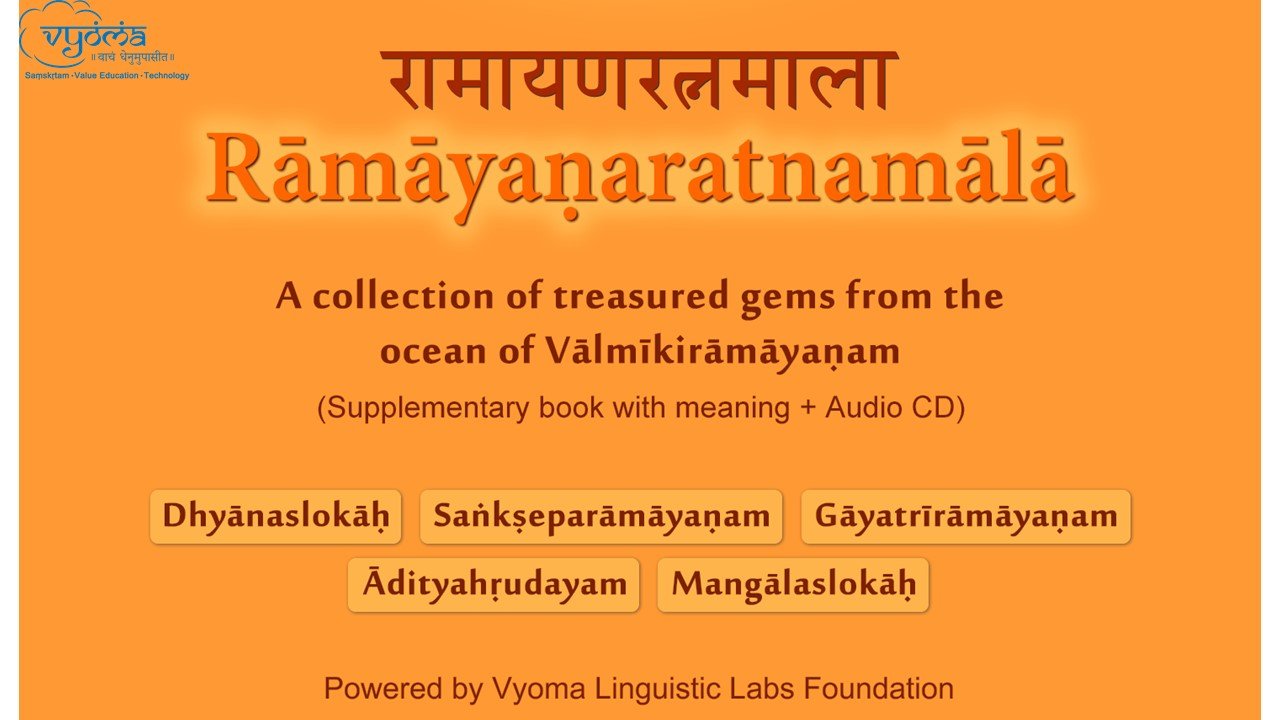 Sankshepa Ramayanam
Ramayanam is the first epic (आदिकाव्य) of world literature consisting nearly 24,000 verses mostly set in the Shloka/Anushtubh meter, written by Valmiki Maharshi. The verses are divided into seven kandas: The Bala kanda the Ayodhya kanda, the Aranya kanda, the Kishkindha kanda, the Sundara kanda, the Yuddhakanda and Uttarakanda and about 500 sargas (chapters). It narrates the life of Rama, prince of the Kosala kingdom. The story follows his fourteen-year exile to the forest to follow the father’s words, that was given to Rama's stepmother Kaikeyi in return of saving Dasharatha’s life in a war. Rama along with his wife Sita and brother Lakshmana, travels across forests, the kidnapping of Sita by Lankeshwara Ravana, which caused the war; and Rama's eventual return to Ayodhya to be crowned king amidst rejoice and celebration. This whole story is summarized into 100 verses which is known as Sankshepa Ramayanam that is found in the starting of Bala kanda.

Gayatri Ramayana
Ramayana is a story of Rama who belonged to the clan of Surya called Surya vamsha. Gayatri mantra is a mantra of Savitru devata that is Surya. Gayatri is the most powerful mantra among all mantras. Ramayana contains all 24 syllables of Gayatri mantra. Because Gayatri mantra invokes the Sun God to guide our intellects in the right decision-making process, Maharshi Valmiki has placed a syllable of Gayatri Mantra in the beginning of each 1,000 slokas, total 24 syllables, in the 24,000 verses of Ramayana. It is also because Lord Rama belongs to Suryavamsa the dynasty which has its origins from Sun God. It signifies that Ramayana is the essence of the entire Vedas and Sri Rama is Narayana.
Aditya hridayam
Adityahridayam is a devotional hymn of 31 verses dedicated to the sun god called as Aditya or Suya. It is found in the Yuddha Kanda (6.105) of Valmiki's Ramayana. It was taught by the sage Agastya to Rama in the battlefield before fighting with Ravana, king of Lanka. In it, to defeat the enemies Agastya teaches the procedure of worshiping Aditya to Rama, who is tired after the prolonged battle with several warriors of Lanka to defeat the enemy.
24 Dhyana shlokas, 100 verses of sankshepa ramayana, 24 verses of Gayatri Ramayana, 31 verses of Aditya hridayam and 12 Mangalashlokas are covered in this course.
There is no certificate offered currently for this course by Vyoma.
1.Scroll above and Click on "Enroll for Free" button.
2.If you have not signed in, you can sign in. If you are a new user, you can get a new account for free in less than 2 minutes.
3.Once you enroll, you can access all materials from your learning dashboard.
4.Link to join the live classes will also be available from your learning dashboard.
5.For any issues / questions, please check our FAQ page / contact our support team here.