This is a Free Live Webinar course in Sanskrit, by Shri. Rajeshwara Rao Bhandaru. Shiksha, the science of phonetics, is one of the six vedangas, or limbs of Vedic studies, in Sanskrit. Paniniya Shiksha is a text focussing on the letters of the Sanskrit alphabet, accent, quantity, stress, melody and rules of euphonic combination of words during Sanskrit recitation. In this course, Shri. Rajeshwara Rao Bhandaru teaches the text in a traditional way, through Sanskrit medium. 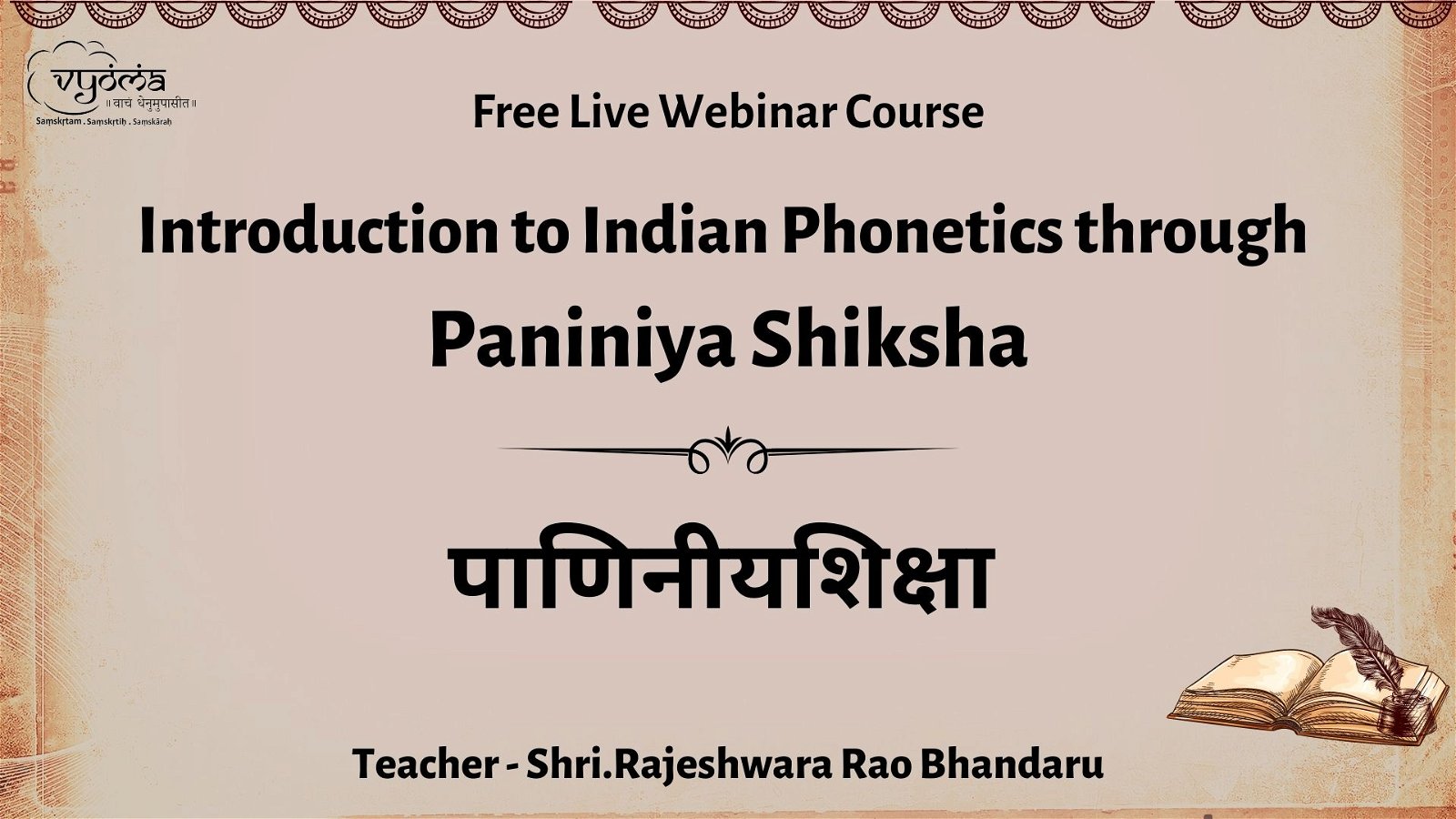 शिक्षा व्याकरणं छन्दः निरुक्तं ज्यौतिषं तथा । कल्पश्चेति षडङ्गानि वेदस्याहुर्मनीषिणः ॥
There are 6 limbs which assist the study of vedas - Shiksha (Science of Phonetics), Vyakarana (Science of Grammar), Chandas (Science of meters), Nirukta (Science of Etymology), Jyotisha (Science of movement of heavenly bodies) and Kalpa (methodology of performing rituals).
Of these, the Shiksha shastra deals in great detail about each and every sound of the Sanskrit language, their origin and effort involved in pronunciation, nuances of good pronunciation, various faults which may arise during pronunciation, etc. The aim of Shiksha shastra is to ensure that the vedic sounds are retained in their original, pristine form as they are passed through the generations, without undergoing any mutations.
There are many different texts on Shiksha composed by various sages such as Yajnyavalkya Shiksha, Parasharya Shiksha, Vaasishtha Shiksha, etc. Of these, the Paniniya Shiksha attributed to Panini is the most popular. It is a small metrical work of 60 verses, elucidating the major aspects of phonetics.
This course covers the text of Paniniya Shiksha with 60 verses. Each verse is explained in detail with padavibhaga and anvaya.
Yes, there will be an assessment conducted at the end of the course, and certificates will be issued to all students who get a minimum of 60% in the assessment.
1. Scroll above and Click on the "Enroll for Free" button.
2. If you have not signed in, you can sign in. If you are a new user, you can get a new account for free in less than 2 minutes.
3. Once you enroll, you can access all materials from your learning dashboard.
4. For any issues/questions, please check our FAQ page / contact our support team here.