Learn Life Skills through Panchatantra - 1 A textual study of Mitrabheda

Panchatantra is an ancient Indian collection of inter-woven animal fables in Sanskrit with human virtues and vices. It consists of five main parts, illustrated for the benefit of three ignorant princes. Mitrabheda being the first part covers a series of fables describing the conspiracies and causes that lead to close and inseparable friends breaking up. Smt. Vishnupriya Srinivasan will be expounding these verses and stories of this part in simple Sanskrit. 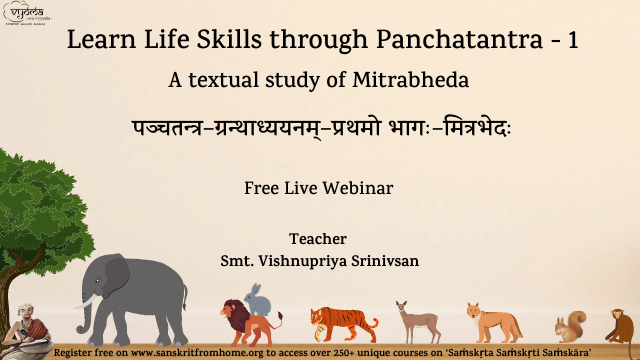 The Panchatantra is an ancient Indian collection of interrelated animal fables in Sanskrit verse and prose, Composed by Vishnu Sharma.
It is the most frequently translated literary work of India and these stories are among the most widely known in the world. It goes by many names in many cultures. There is a version of Panchatantra in nearly every major language of India, and in addition, there are 200 versions of the text in more than 50 languages around the world.
It is said that these stories were illustrated by Vishnu Sharma, a wise scholar to the three ignorant princes of Amarashakti. He demonstrates principles of good governance, right conduct of life, unity, focus, dexterity, co-operation, interpersonal behaviours, teamwork, right alliances, self - empowerment, peaceful management of everyone’s needs, gratitude, positive and negative consequences of actions, disasters following hasty decisions, due diligence and a lot more.
All stories in the First Tantra (Mitrabheda) will be covered in this course.
Yes, there will be an assessment conducted at the end of the course, and certificates will be issued to all students who get a minimum of 60% in the assessment.
1. Scroll above and Click on the "Enroll for Free" button.
2. If you have not signed in, you can sign in. If you are a new user, you can get a new account for free in less than 2 minutes.
3. Once you enroll, you can access all materials from your learning dashboard.
4. For any issues/questions, please check our FAQ page / Help Videos.