Meaning of Narayaneeyam – Discourses in English

Sriman Narayaneeyam of Narayana Bhattatiri is one of the most popular and powerful stotra texts, which has transformed the lives of innumerable devotees. The course consists of discourses explaining the meaning of the verses, taking 5 dashakas at a time. This is a companion course to the course on Learn to Chant Narayaneeyam by the same teacher, Shri. Shankararama Sharma. 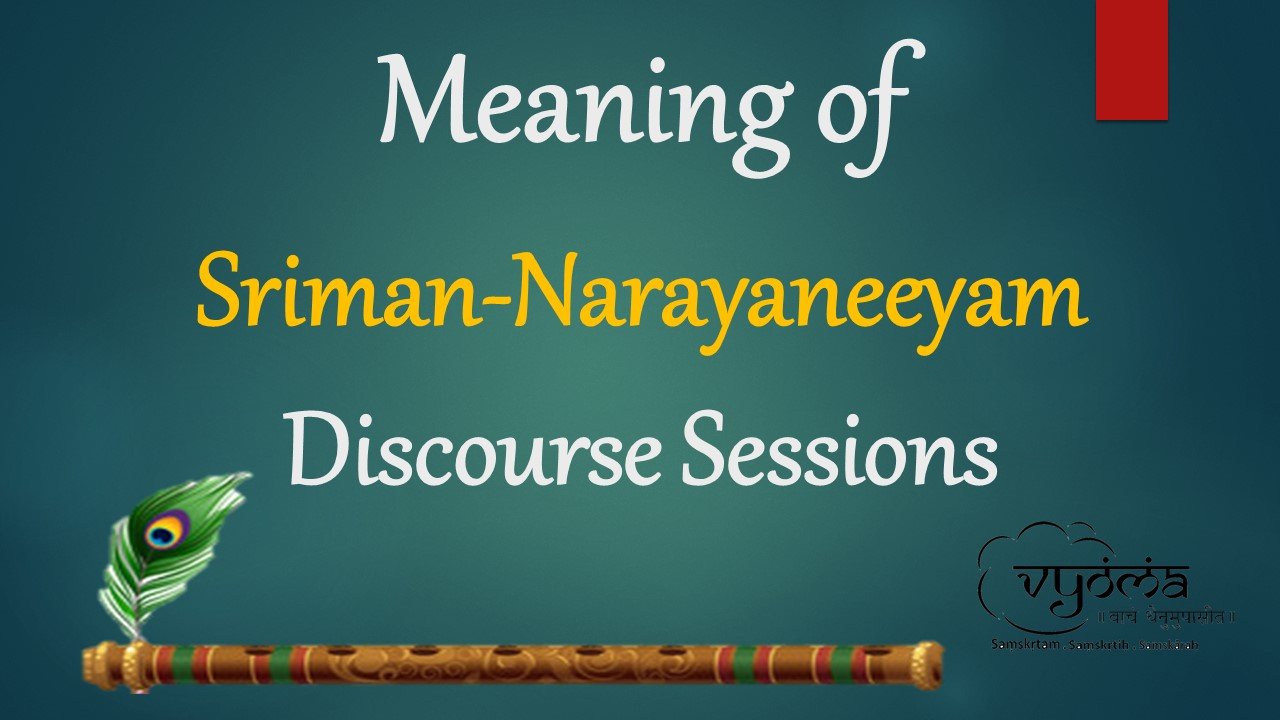 Narayaneeyam is a great epic poem written by Sri Meppattur Narayana Bhattathiri. The author was suffering from very severe Vatha Roga (rheumatism), which was highly troubling him. He got it cured by the writing of this poem. In this process he attained great devotion and the vision of the Lord. He composed and sang the whole Narayaneeyam in front of the Lord at the temple of Guruvayur.
Sreemad Bhagavatham is the most important among the eighteen main Puranas, comprising 18000 slokas. Narayaneeyam is a compilation of the same stories and content in a condensed way, containing about 1036 slokas. It is highly rich in philosophical and devotional in ideas, no way inferior to Bhagavata grantha itself.
Story of the poem and the poet
It is known from the historical accounts that the poet-bhakta Shri Narayana Bhattathiri was born in 1560 AD in a Brahmin Namboothiri family of Kerala, at a place close to the famous temple at Tirunelveli, on the banks of river Bharatpuzha (reference to which is found in Dasakam 92, verse 7). He learned all the traditional texts, and scientific scriptures by the age of 16. His Guru Achutha Pisharodi took care that he became an ardent scholar. Once his Guru was affected by vata disease and Narayana Bhattathiri pained by seeing his guru’s pathetic condition, very ardently prayed to the Bhagavan to transfer the problem to himself. Bhagavan listened to him and his Guru got cured. The disease filled Narayana Bhattathiri’s body. To be relieved of the disease, he decided to do sharanagati to the feet of Bhagavan Krishna in the temple of Guruvaayur, and seek His anugraha.
There was a philosopher and devotee in his time named Thunchant (Thunjath Ramanuja) Ezhuthachan. Bhattathiri requested him to show a way out of this situation. The philosopher instructed him to start with fish. Bhattathiri started writing verses about the Bhagavan glorifying Him with the various avataras like Matsyavatara (the incarnation as fish). He took the whole ten incarnations of Bhagavan Vishnu described in the Bhagavata Purana, as his subject of the poem and composed the precise kind of mini-Bhagavata Purana in the form of Shriman Naarayaneyam.
Bhattathiri while suffering from his Vata roga, in its heavy stage, would visit the temple and seeing the deity would compose and render one Dashakam, that is ten stanzas as a set, each day and offer it at the feet of the Bhagavan. In a time period of hundred days of devoted praying, the Narayaneeyam wholly was composed. It consists of 100 Dashakams.
The central theme of Narayaneeyam is Bhakti (devotion). To overcome his pain the poet would use this writing as a tool to invoke the blessings of the Bhagavan and towards the end, his prayers were answered. On the hundredth day Bhagavan was visible to him! Narayana was overjoyed with bliss and extreme inner fulfillment by this vision of Narayana Himself and in the 100th Daskakam he echoes his heart feeling in a verse- “Agre Pashyami= here I see Him in front of me!” He vividly describes the Bhagavan’s divine form that he saw directly, from head to foot. He got totally cured of his ailment that very moment.
Narayaneeyam was written by Bhattathiri at the age of 27. He lived to the ripe age of 96 years as a humble devotee, poet and great philosopher. He has written many books on poetry, philosophy and Sanskrit grammar.
Scholars have tried to find with the help of internal evidence in the epic itself, that the Narayaneeyam was completed on the 28th day of Vrischika (November-December) month of the Malayalam (Kollam) Era 763 (approximately November-December, 1587 A.D.)
This course is a companion course to the “Learn to Chant Narayaneeyam” course taught by the same teacher. Discourses will be held after every 5 dashakas, summarising the purport of the verses in those dashakas.
There is no certificate offered currently for this course by Vyoma.
1.Scroll above and Click on "Enroll for Free" button.
2.If you have not signed in, you can sign in. If you are a new user, you can get a new account for free in less than 2 minutes.
3.Once you enroll, you can access all materials from your learning dashboard.
3.Once you enroll, you can access all materials from your learning dashboard.
4.Link to join the live classes will also be available from your learning dashboard.
5.For any issues / questions, please check our FAQ page / contact our support team here.