Kashika is one of the oldest available texts of the Paninian tradition, and is highly respected by scholars for providing a comprehensive explanation of the sutras with examples, retaining the sequence and structure of the Ashtadhyayi. Vid. Vaishnava Simha explains the source text, line by line, including insights from commentaries according to the context. 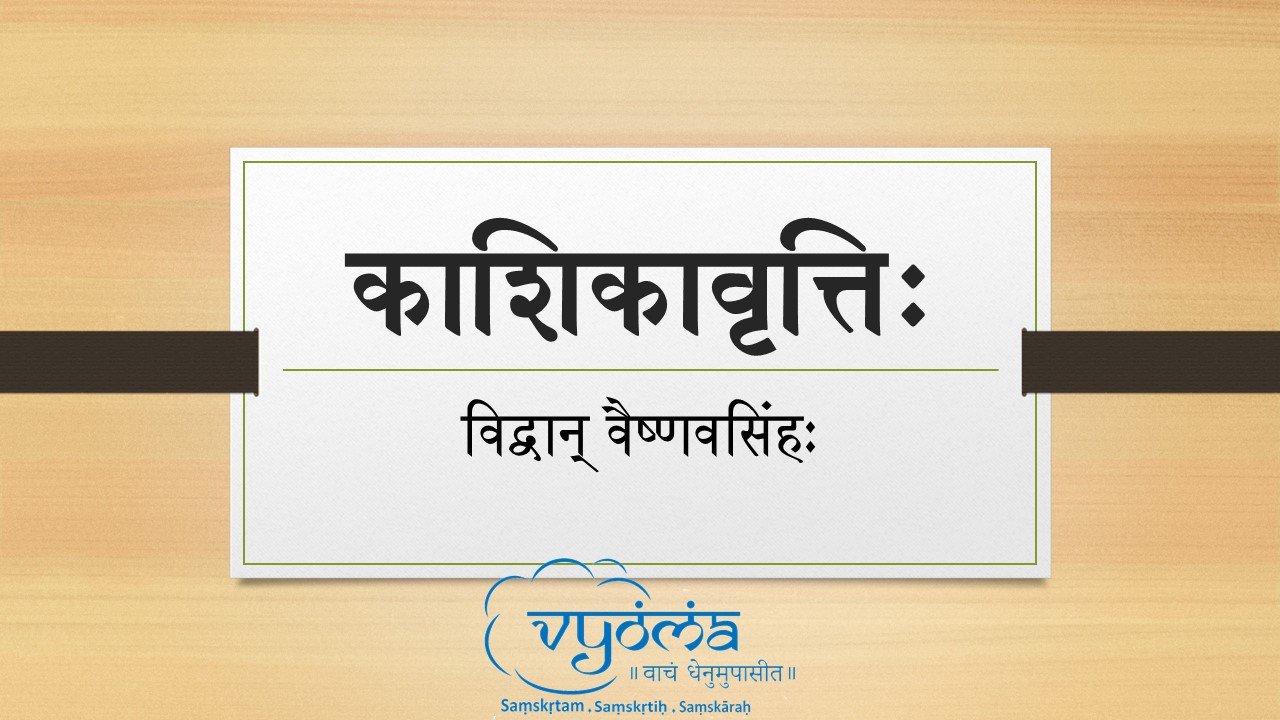 
This is a popular saying which highlights the importance of studying Paninian Grammar. A basic knowledge of grammar is essential for all students who wish to study any literature or shaastra in Sanskrit.

The Kashika is a running commentary on Panini’s Ashtadhyayi. It explains sutras of Panini in a clear manner. Each rule has all the anuvrittis and numerous illustrations. Two commentaries on Kashika are famous and widely studied all over the world. They are – Jinendrabuddhi’s Kashika-Nyasa or Kashika vivarana panjika and Haradatta’s Padamanjari.

The Kashika was once believed to be the work of one author variously called Vamana, Jayaditya, or VamanaJayaditya. Later it was found out that they are two different persons. The Nyasakara and Bhattoji Dikshita clearly distinguish between their views. The concurrent testimony of MSS from all parts of India assigns to Jayaditya the authorship of the first five chapters of it, while the last three belong to Vamana, who probably came soon after Jayaditya and certainly before the time of Jinendrabuddhi, who comments upon the whole work.

There is also another theory regarding the writers of Kashika that is Jayaditya and Vamana have written commentaries separately on the entire Ashtadhyayi, but the first five chapters written by Vamana, last three chapters written by Jayaditya were instantly lost, and some scholar from Kashi combined both works. Hence the compilation took place in Kashi, the commentary was prominently known as Kashika.

Kashika was famous among the scholars of Vyakarana and was one of the widely taught texts in the shastra. With the advent of prakriya-krama and the growing popularity of the Siddhanta Kaumudi of Bhattoji Dikshita, Kashika was dropped from many university syllabi. However, the praacheena-krama of Vyakarana adhyayana followed in many gurukulas in North India still teaches Kashika as the primary text, sometimes preceded by the shorter introductory text Prathamavritti.

Even scholars well-versed in the Kaumudi-krama recognize the importance of Kashika for gaining a comprehensive understanding of sutras and appreciating the structure and arrangement of Ashtadhyayi. Studying Kashika provides students with a unique, all-around perspective of the sutras and their application.

The first Chapter of Kashikavrutti प्रत्याहाराः is covered in this course with reference to Nyasa occasionally. There are 14 Maheshvarasutras called variously as अक्षरसमाम्नाय, प्रत्याहारसूत्राणि, which are the base for all the 4000 Paninian sutras. The use of each pratyaharas are discussed in this chapter.
There is no certificate offered currently for this course by Vyoma.