This is a humble attempt by the Vyoma team of scholars, to provide one of the most authentic pronunciations of the Bhagavad Gita, in the Teacher-Student Karaoke Mode. Here we can see the synchronized text in both Sanskrit and English and follow the teacher’s chanting. It is easier than ever to learn to chant the Bhagavad Gita correctly, with bhaava and devotion. Just follow the text on screen and repeat after the teacher to learn the verses easily. 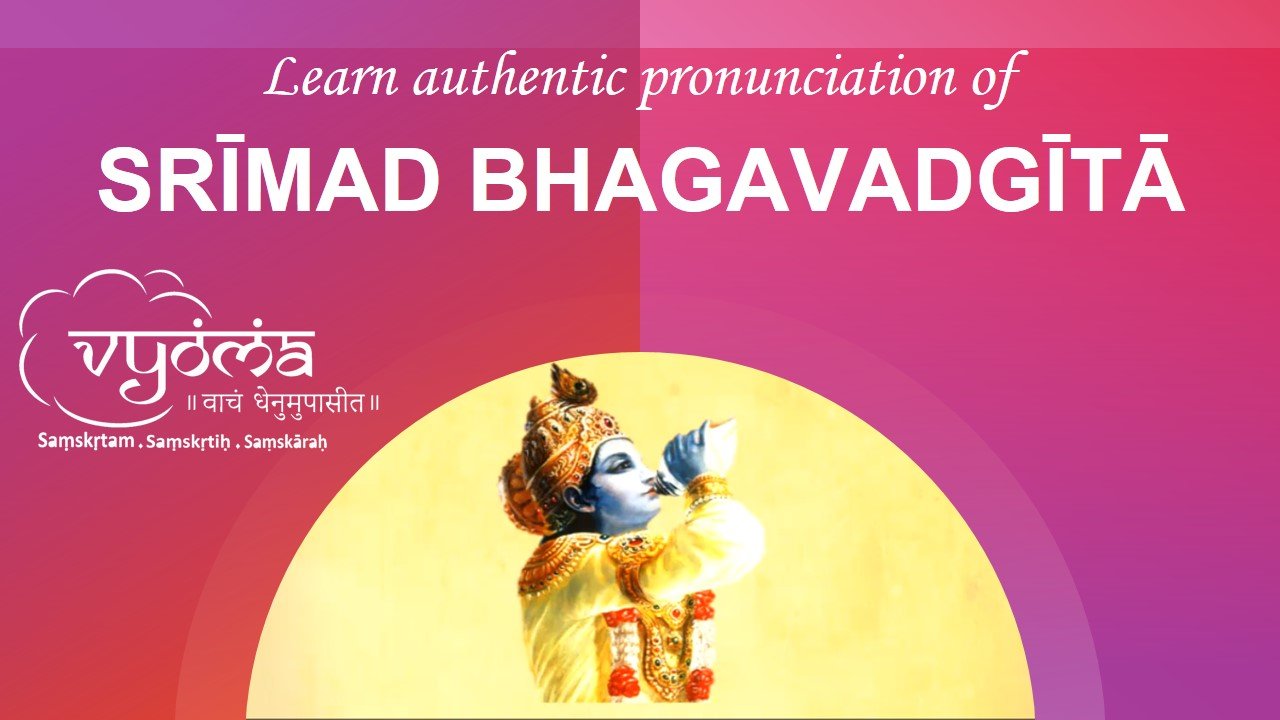 The Bhagavad gita is the one of the most followed and sacred scripture of Hindus. It is the text of 700-verses which is part of the epic Mahabharata’s Bhishma parva. It is said that Bhagavad Gita is written by Lord Ganesha which was told to him by Vyasa. The setting of the Gita in a battlefield has been interpreted as an allegory for the ethical and moral struggles of human life. The Gita has 18 chapters in total. Dialogue between Kaunteya Arjuna and his guide and charioteer Krishna is a narrative framework of Gita. At the starting of the war which is often referred as Dharma yuddha between Pandavas and Kauravas, Arjuna is infused with ethical dilemma and despair about the violence and death of his own people which war will cause. Thinking of the loss of his own people he puts off his weapons and seeks the advice of Krishna. Shree Krishna advices Arjuna to fulfil his Kshatriya duty to uphold the Dharma. Conversation between them in the form of questions and answers is Bhagavadgita. This interlocution covers a broad range of spiritual topics, touching upon ethical dilemmas and philosophical issues that go far beyond the war Arjuna faces. The Bhagavad Gita presents a synthesis of Vaidic ideas about dharma, theistic bhakti, and the yogic ideals of moksha. The text covers jnana, bhakti, karma, and Raja Yoga (spoken of in the 6th chapter) incorporating ideas from the Samkhya-Yoga philosophy.
All 18 chapters of the Bhagavadgita are covered in the course, along with the Dhyana shlokas (to be chanted at the beginning of parayana).


There is no certificate offered currently for this course by Vyoma.
1. Scroll above and Click on "Enroll for Free" button.
2. If you have not signed in, you can sign in. If you are a new user, you can get a new account for free in less than 2 minutes.
3. Once you enroll, you can access all materials from your learning dashboard.
4. For any issues / questions, please check our FAQ page / contact our support team here.