Kumara-Sambhava of Kalidasa is one of the famed Pancha-Mahakavyas. It contains 17 sargas dealing with the birth and adolescence of the Parvati, her marriage to Shiva and the subsequent birth of their son Kumara (Kartikeya). In these pre-recorded videos, Smt. Visalakshi Sankaran explains the shlokas of the first sarga of this poem in English, with insights from the commentary of Narayana Pandita. 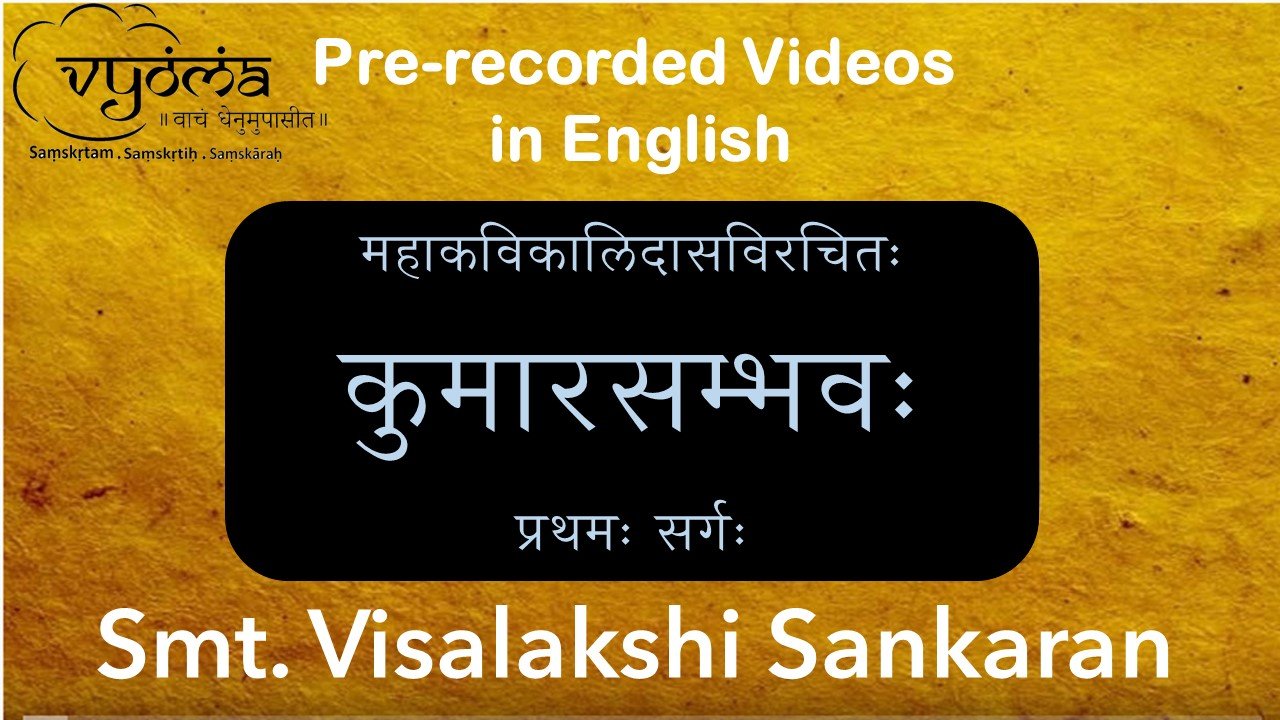 Mahakavi Kalidasa is one of the greatest figures in Samskrita literature. Each of his works is a masterpiece, overflowing with beauty and grace in every verse. Kalidasa is said to have composed 7 works –
Two Mahakavyas – Raghuvamsha and Kumarasambhava
Two Khandakavyas – Meghaduta and Rtusamhara
Three Naatakas – Malavikagnimitra, Vikramorvashiya and Abhijnana Shakuntala
Of these, the Kumara-Sambhava Mahakavya is a composition of 17 sargas. It starts with a glorious depiction of the Himalayas and Parvati, describes her efforts to attract Shiva’s attention, the popular episode of Kaama-dahana, Shiva testing Parvati’s devotion, the marriage of Shiva and Parvati, birth of Kumara (Kartikeya) and the killing of Taarakasura. It has Shringara as the main rasa, with veera and karunarasa being subordinate sentiments.
This course covers the first sarga of the Kumara Sambhava, containing 60 verses. The verses describe the Himalaya – king of mountains, and his daughter Parvati. Parvati is appointed by Himalaya to serve Lord Shiva, who was engaged in penance after the death of his wife Sati at the sacrifice of Daksha.
Each verse is explained in detail in English. Points from the commentary of Narayana Pandita are also explained as appropriate
There is no certificate offered currently for this course by Vyoma.
1. Scroll above and Click on "Enroll for Free" button.
2. If you have not signed in, you can sign in. If you are a new user, you can get a new account for free in less than 2 minutes.
3. Once you enroll, you can access all materials from your learning dashboard.
4. For any issues / questions, please check our FAQ page / contact our support team here.