Indian Mathematics has a glorious tradition of more than 2 millenia. Sadratnamala is a treatise in Samskrita written by Shankaravarma, an astronomer-mathematician of the Kerala school of mathematics, in 1819. This text is ideal for beginners to understand the basic terms and approach of Indian Mathematics. In this course, Dr. Chandrasekharan Raman explains the verses of first two chapters of the text in simple Samskrita, covering the basic operations and technical terms of the shastra.

What will you gain from this course? (Key Benefits / Learning Outcomes): 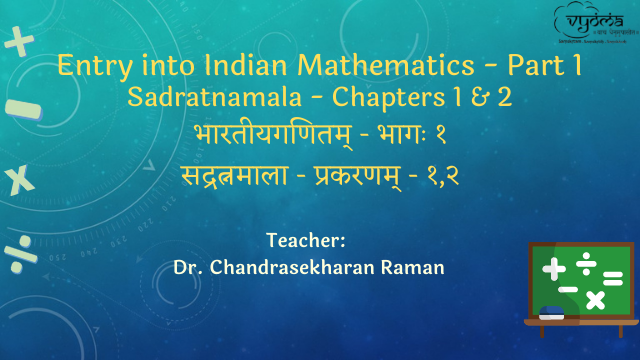 Sadratnamala is an astronomical-mathematical treatise in Samskritam written by Shankaravarma in 1819.
Shankaravarma was an astronomer-mathematician of the Kerala school of mathematics, who lived in the late 18th - early 19th century CE. He was a younger prince in the principality of Katathanad in North Malabar of Kerala. He was known by the name ‘Appu Thampuran’ by the local people.
The book contains six chapters (prakaranas) which in turn cumulatively contain 212 verses. Chapters are referred as prakarana-s here.
परिकर्माष्टकप्रकरणम् - Basic Mathematical Operations
परिभाषाप्रकरणम् - Technical terms of measurement
पञ्चाङ्गप्रकरणम् - Katapayadi system, astronomical calculations
ज्याचापादिप्रकरणम् - Various measurements related to circles, arcs and jya
पञ्चबोधप्रकरणम् - Discussion on the 5 elements (chaya, vyatipata, etc)
गणितपरिष्करणप्रकरणम् - Methods of computation of planetary positions, orbits, circumference of earth, etc
The first two chapters introduce basic arithmetic operations and measurements in 33 verses and these two chapters will be covered in this course.
First chapter of the text contains 19 verses on the 8 basic mathematical operations. Second chapter contains 14 verses on technical terms of measurement. In this course, the teacher would introduce the students to read and understand the shlokas directly in Samskritam, rather than using a translation. This would help participants to explore the vast treasure of Indian Mathematics further.
Yes, there will be homework assessments at the end of each class. Learners who complete all assignments and gain over 60% of marks will get a certificate from Vyoma Labs.