The Dakshinamurti stotram is a magnum opus of Adi Shankaracharya – a short but very deep, profound Vedantic work comprising of 10 verses. In this series of 16 lectures, Prof. B Mahadevan brings out the philosophical insights contained in this work. 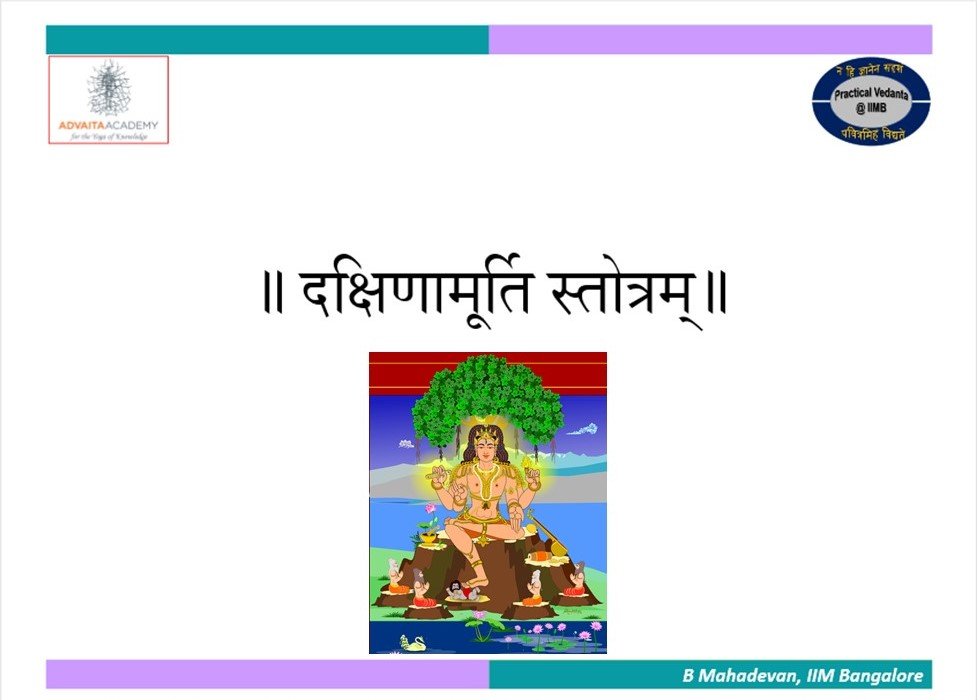 Dakshinamurti stotram is written by Shri Adi Shankaracharya. This stotram preaches the advaita tattva. Dakshinamurti is the incarnation of God Shiva who is the source of knowledge as praised by Shri Shankaracharya "निधये सर्वविद्यानां". Dakshina means knowledge and Shiva is supreme god of knowledge since he is called as Dakshinamurti. He represents Shiva in his aspect as a teacher of yoga, music, and wisdom, and giving exposition on the shastras. Dakshina murti is often picturized doing penance facing south direction under banyan tree, surrounded by 4 Kumaras (सनक, सनन्दन, सनत्कुमार, सनत्सुजात) his disciples. It is said that he answered all their questions without uttering a single word. This form of shiva is called as दक्षिणामूर्ति mainly worshipped by अद्वैतवेदान्त followers. In the present stotram Shri Shankaracharya depicts Dakshinamurti through Advaita tattva.

This course explores the Dakshinamurti stotra in detail. In this series of 16 lectures, Prof. B Mahadevan brings out the philosophical insights contained in this work. Being a Dakshinamurti-upasaka himself, he combines his practical experience with shastric knowledge to enlighten the audience.